I can only give my account here, so I decided to narrow this post down from “studying osteopathy” to “studying at the BSO”. I studied the full time MOst course from 2012-2016, with former part time students and pre-registered physiotherapists and sports therapists joining us for third and fourth year. This has changed somewhat, but this is an account of my experiences. 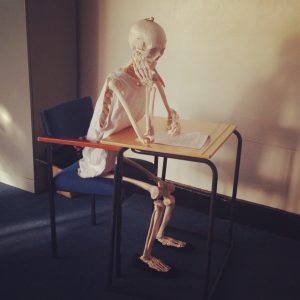 Because the British School of Osteopathy doesn’t have halls of residence, we lived locally in general student housing. BSO did play a role in this by organising an accommodation day about a week after A level results came out. On this day, anyone who wanted to find housemates and somewhere to live would meet at BSO, introduce themselves, then head out to find a house. This worked pretty well for me; I met three girls in the morning and by 5pm we’d put down a deposit for a terrace in Elephant and Castle. Although it’s intense, it gives you more choice than halls would, and I was still living with one of my housemates until I graduated, so it did pay off to choose our own! This also meant that I met the other girls I’d live with in subsequent years, so there was a bit of a community before the course even started.

The course itself feels like it’s split into two. Clinic runs through the whole four years, but before you start taking your own patients at the end of second year, it’s quite academic. This isn’t a criticism- we need to know what we’re doing before we get hands on! But it means that the transition from 2nd to 3rd year is incredible. The first time I treated someone myself and they came back feeling better is the moment I knew for sure that it’s what I wanted to do. 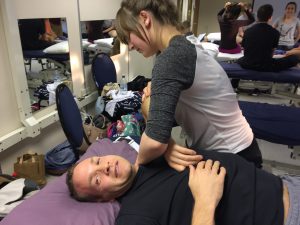 For the first two years, there’s a lot of biology (following on seamlessly from A Level): anatomy and pathophysiology. This blends into a more clinical set of subjects once the knowledge base is there, and fits in well with the practical side. We learn our techniques on each other, starting with examination in first year, moving into treatment in second, then honing manipulation techniques and taking on electives in third and fourth year. I found it pretty tough, but that’s because I’m generally quite uncoordinated and didn’t spend enough time practicing- learn from my mistakes and make the most of the vast number of practice rooms! Aside from the usual osteopathic assessment and treatment, we also studied systemic examination. Learning to take blood pressure, perform a neurological exam, and notice unusual signs in the abdomen are so important for becoming a safe and holistic practitioner.

As an ex-student ambassador, at this point it seems worth mentioning that the BSO is the oldest and biggest osteopathy school and clinic in the UK. The library has a huge collection of osteopathic work- online and offline- and access to plenty of medical journals. Anatomical models in the library study room help to consolidate the learning we’ve done from books and lectures. The three computer rooms make group work and studying between lectures easier. 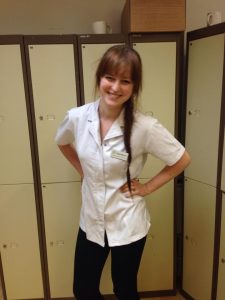 Clinic picks up in third and fourth year, with two or three half days there a week. GOsC requires 1000 clinical hours as a student in order to qualify, and I’m so glad they do! We started observing once every few weeks in first year, building that up in second year and getting more involved with working in the clinic. Being asked to take a new patient case history in the middle of second year was such a valuable experience for a student severely lacking confidence, and the clinic really set me up for working with my own patients.

Another benefit of the BSO’s clinic is its number of outreach clinics. The clinics for HIV positive people were eye opening and so rewarding, the children’s clinics got us thinking about further study in paediatrics, and the expectant mothers’ clinic prepared us for all the other considerations that come with treating pregnant women. In clinic in third and fourth year we begin to mentor first and second years. As a second year lacking confidence, this was so important. The year above made sure I got involved and tested my knowledge in a way that stuck so much better than in class. As a third/fourth year, I loved being able to give something back, pass on the tips that worked for me, and help others build their confidence.

Fourth year is also the year that we get to sample other aspects of osteopathy in the form of electives. BSO has a reputation for being very biomechanical (structural osteopathy), which I think is probably the best one to start with as a student osteopath. The practical electives of cranial, visceral, functional, and advanced manipulation all have their benefits in clinic and as a graduate. They also helped me work out what I’d like to study in more depth with weekend courses and what I won’t be looking into for a while. Obstetrics and Osteopathy was another very useful elective, particularly when paired with working in the Expectant Mothers’ Clinic; and Nutrition helped me to think more holistically.

The students also run Manus Sinistra, a society that puts on evening talks on various topics relevant to osteopathy. It’s open to everyone- students or not, and has hosted big names in the field who are otherwise only available at high cost.

What I loved the most about BSO was the close relationship with the whole uni that comes with being such a small and focused school. We got to know other people in our own year very well- you don’t have a choice when you’re spending hours every week working on each other! But I suppose osteopathy attracts people-people, and by third year there wasn’t a face in the student body that I wouldn’t recognise. The Student Union puts in a lot of effort for half term and end of term parties, and the bar attracts a fun bunch of regulars spanning across all years.

But this isn’t just a social benefit- osteopathy is a small profession and knowing your colleagues well is important for referring patients onto practitioners who’ll suit them. We did get some interaction with the other osteopathy schools at least once a year- at sports day. BSO, BCOM, and Swansea meet up at the ESO for team sports and a fun run with drinks and a BBQ. It’s more of a competitive atmosphere than a networking one but it’s still fun!

I don’t have the experience to compare the BSO with other schools, but I found the whole four years enjoyable. The course is focused to prepare us for work, and the staff are so knowledgeable and supportive. Working hands on with other students every day has built some irreplaceable friendships, and living in London was a brilliant experience in itself. I would highly recommend the BSO to anyone considering studying osteopathy.

If you have any questions about osteopathy as a career, please feel free to contact me via email (freya@freyagilmore.uk) or facebook.

2 thoughts on “Osteopathy as a Career: studying at the BSO (now UCO)”