Scoliosis is one of those words that either you’ve never heard of or you would dread to be diagnosed with. I wouldn’t call it a complete diagnosis in itself, but more of a finding that needs to be taken into account. If it’s insignificant enough to go undetected through childhood, then it’s likely that it’s subtle enough to be manageable. From a self conscious point of view, it’s probably also invisible to the untrained eye.

By definition, a scoliotic spine will curve to one side, in a C shape or an S shape. It may rotate to the other side to compensate. The sideways curve is most obvious standing normally, and the rotation is clearest bending forwards, as one side will be higher.

The similar sounding words “lordosis” and “kyphosis” are not to be confused. Sometimes a patient will come in reporting that someone has found a “curve” in the spine. This can be a lateral curve (scoliosis), or it can be an exaggerated lordosis (arched lower back or turtle neck), or kyphosis (hunchback). Again, these are not diagnoses on their own- just findings. 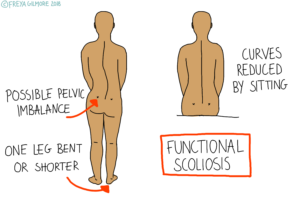 A functional (or “postural”) scoliosis is visible when standing, but not sitting. This is because the curve comes from an imbalance below the base of the spine. When the patient sits, and the asymmetrical area is moved from the equation, the curve disappears. Typically this asymmetry is due to one leg being longer than the other. A leg length discrepancy is a lot more common than you might think, humans are not particularly symmetrical things!

Often a functional scoliosis goes undetected because it’s an efficient adaptation. You can’t change your leg lengths once you stop growing, so if your flexible spine can compensate painlessly while you’re on your feet, it’s doing exactly what it’s meant to. If the spine is unable to adapt properly, a few joints may have to compensate for the others, and that is often where the pain comes from. 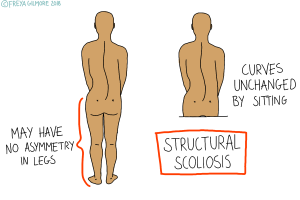 In a structural scoliosis, the spine itself is curved. This is most commonly due to a change in the shape of the vertebrae. If this is significant enough and diagnosed in childhood, bracing or surgery may be prescribed to limit the curve.

If this is not picked up in childhood or adolescence, it is likely that the body has adapted well to it. If it begins to play into problems later in life, it can probably be worked with and given a good prognosis. As shown in the diagram, a structural scoliosis will not change on sitting- because the cause of the curves has not been removed. This means that there is little if any respite from it. Consider that if you’ve been living with this for up to 24 hours a day for however many years, that maybe it’s not a problem as such, but rather normal for you.

If it is diagnosed while it’s still developing, your doctors will monitor it. X-rays are the best way to measure the severity of the curves, and treatment will vary depending on these results. More mild cases are managed with exercises and physical therapy. Moderate and severe cases are considered for a brace or surgery.

With either type, curves in the spine will be compensated for. We talk about the concave side (the hollow side), and consider that the muscles there will be shortened and tight. The joints may also be compressed and cause discomfort. When treating someone with a scoliosis, I will either be working with or against the curves. Working with the curves means improving the adaptability of the body, so that the scoliosis has a smaller effect on function and therefore pain. This might include loosening those tight muscles and mobilising stiff joints. Working against the curves is more applicable to the functional type: further enabling the spine to straighten in positions like sitting, or laying down.

Exercise is recognised to be an important part of treatment to keep joints moving and muscles stretched- your osteopath can advise rehabilitation exercises and higher impact activity. Your osteopath may also prescribe strengthening exercises to further improve adaptability.