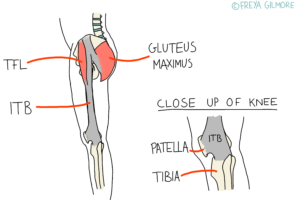 The ITB is a great conversation starter, because it’s so poorly understood. Patients with arthritic knees might complain it’s tight, but often haven’t tried anything to soften it. Sporty patients often tell me it’s tight and that they religiously foam roll it. Funnily enough, these foam rolling patients are the first to admit that it makes no change beyond temporary pain relief.

There are a couple of reasons for this: firstly that the ITB is not a muscle, and does not react as such. It’s more of a ligament or band of fascia- it’s not made to contract. Its tightness is controlled by the TFL (tensor fascia latae): a small muscle at the top of the ITB. Studies show that the lower two thirds of the IT band respond to stretching by less than 2%.

The second reason that foam rolling doesn’t solve the problem of a tight IT band is that a tight ITB is just a symptom. The textbooks describe the main role of ITB as “stabilising the knee in extension”. Look at the diagram above, and you’ll see that TFL does not attach directly to the knee- this action goes through the ITB.

So a tight (or rather “taut”) IT band is a sign of a tight TFL, which in turn is a sign of an unstable knee. The band blends into the knee cap and shin bone, so tension through the band would compress through the whole knee joint. Extrapolating from here, this stabilisation may well cause excessive compression, irritating cartilage within the joint. If the instability was initially caused by a meniscus injury, or arthritis, improving the state of the knee would be imperative to recovery.

Research does show foam rolling to give immediate pain relief to other muscle groups. There is also some improvement to performance after rolling. I do prescribe foam rolling as an exercise to my patients- just not on the IT band.

I’m also a big advocate for spiky massage balls, which work in the same way as a foam roller.